For those that aren’t familiar with the activity, axe throwing at its core is a fairly simple concept; the goal is to throw an axe at a wooden target. Think darts, but with an axe!

Before we continue… a quick history of axe throwing

Axe throwing as a competitive activity is said to have begun in Canadian logging camps almost as early as the industry began. Located in remote areas and looking for entertainment, the lumberjacks began holding competitions to determine who was the best lumberjack. From there “loggersports” were born. 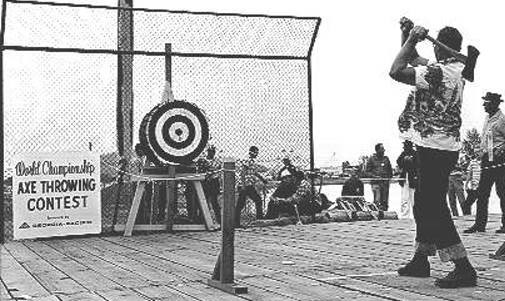 The idea of axe throwing as a modern, competitive activity started in 2006 in a backyard in Toronto, when Matt Wilson invited some friends over to try the activity. As more people began to frequent his backyard, the Backyard Axe Throwing League (BATL) was founded. By 2011, the league had grown to the point that it needed a dedicated space, and moved into a 1,200 sf warehouse. At the time the warehouse was dedicated to leagues only on a not-for-profit basis, until a member requested an event for his hockey team. From there, more private events followed, and axe throwing as a business quickly took hold. In 2013, BATL Toronto East opened in a larger, 7,000 square foot warehouse (full story here). From there, axe throwing venues quickly swept across Canada and into the United States.

Trying axe throwing for ourselves…

A few weeks ago we had a chance to take the Archery Games Denver team to try out the new Axe Whooping Axe Throwing on South Broadway.  Upon arrival, we met our coach, Joe, signed waivers, and were told a few preliminary safety rules. Joe then led us to our targets and introduced us to the easiest way to throw an axe; overhead using two hands. 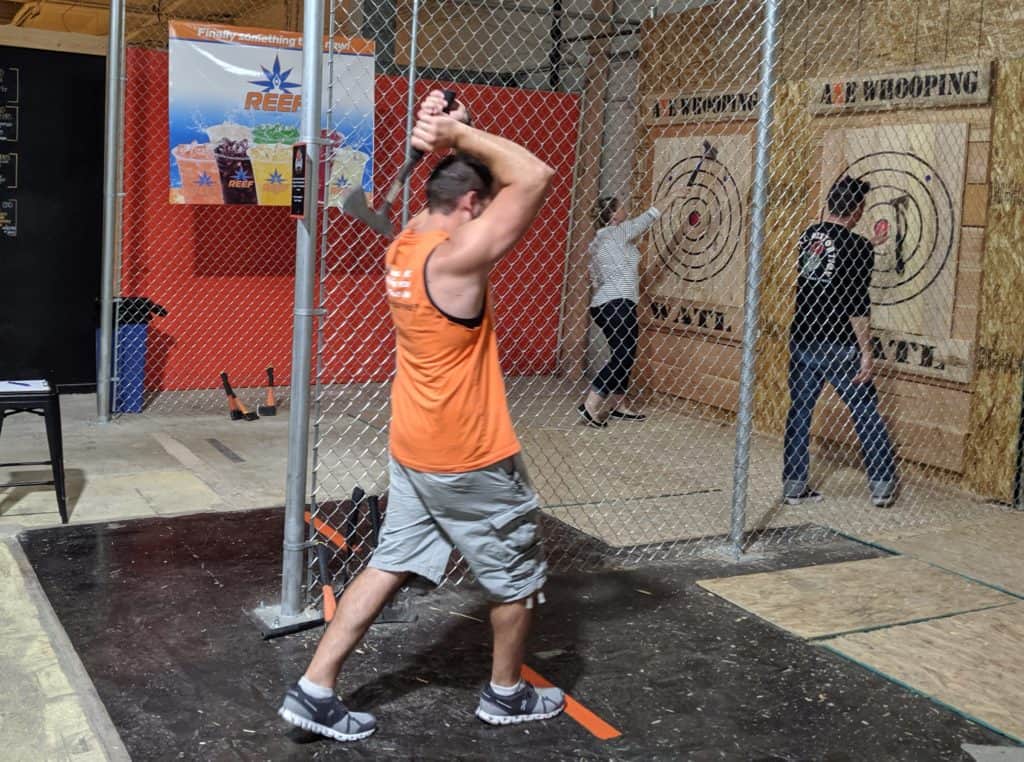 We then cycled through giving each person a try at a few throws. A few members of our group had thrown before, but for most it was their first time. Among the new members of our team, most of our first throws hit the target with a thump and fell to the ground. Joe had played in a competitive axe throwing league for a few seasons, and could easily identify what we were doing wrong. After a few rounds of Joe telling us small adjustments to make (the twists of our wrist, the speed of our arms, the timing of our release, etc) our axes were consistently hitting the targets with an exhilarating thud, and no longer falling to the ground.

Joe then upped the ante by teaching us how to throw one handed. This has the added challenge of keeping the balance of the axe right, but just like two-handed, Joe had us landing our one-handed attempts after only only a few rounds. Throwing one handed also has the obvious benefit of allowing you to throw two axes at a time, should you choose. 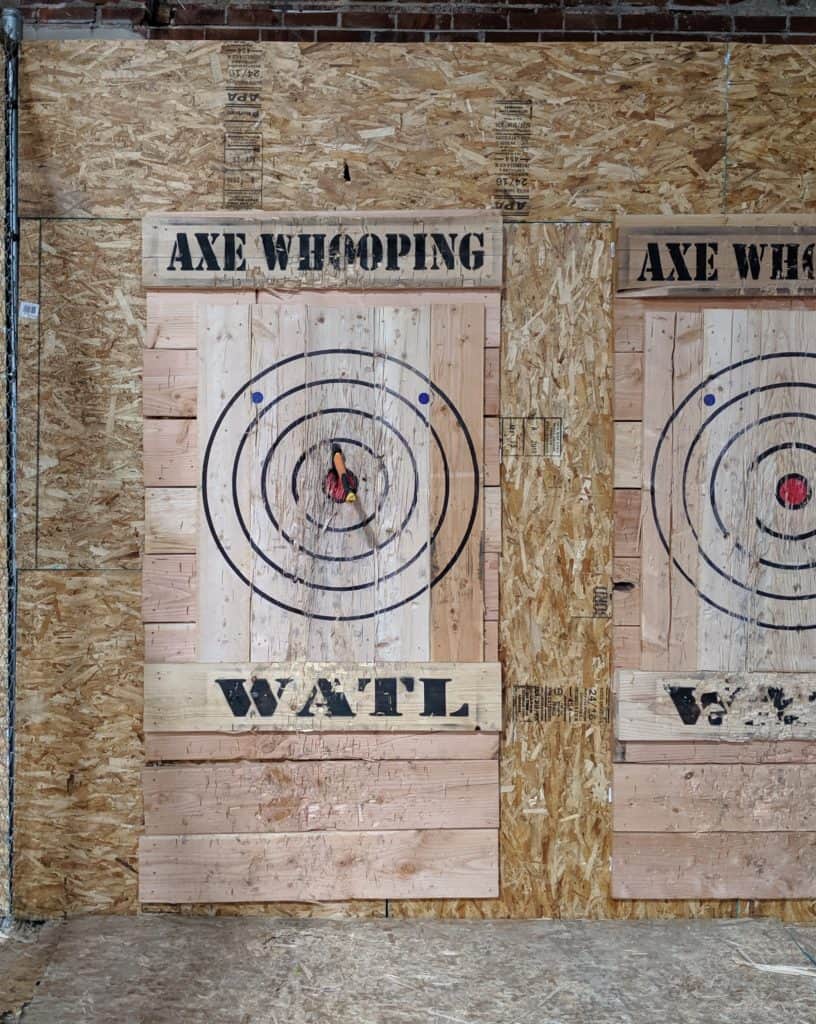 The satisfying thud of a bullseye

Feeling pretty satisfied with our new skills, we then split into teams, and moved onto a competitive game. The challenge was simple: the first team to 100 points wins. The scoring is similar to darts, with different point values based on where on the target you hit.

We had a two hour session, which seemed like a lot of axe throwing when we booked it but the time flew by. By the time we finished the competition (and talking trash about our new skills) there was only a little bit of time left. We were lucky to be there on a slow night (a Wednesday) so during the competition we were also allowed to practice on some of the unused targets.

Being in the team building industry we try a lot of different activities, but nonetheless we were thoroughly impressed by the experience. Axe throwing combines the fun of learning a new skill with friends with a healthy dose of competition, and (at least the illusion of) just a bit of danger. Our favorite team building activities are those that are fun and don’t really feel like “team building”, but leave everyone smiling, high fiving, and simply feeling a little more connected with their peers. The best experiences are those that are unique enough that people keep talking about them weeks after they’re over. On all of those notes, axe throwing delivered.

Our team, full of smiles, after two hours of axe throwing

When we booked the event we didn’t even know they had it, but Axe Whooping also features one of the only rage rooms in Denver. Rage rooms are another simple but exhilarating concept; participants are outfitted with safety gear, handed a giant hammer of their choosing, and placed in a room where they’re allowed to smash everything in sight. The price depends on what you get to smash; the entry level pricing gets you an assortment of plates and cups, and for a few dollars more you can be smashing an old computer monitor (presumably no longer fully functioning). Just like axe throwing, its simplicity is also its charm. Smashing a mug with a Thor hammer and not having to worry about the mess is an experience everyone should try at least once.

Where to throw axes in Denver?

The Denver axe throwing scene started in 2017 with the opening of Bad Axe Throwing in Welby and Downtown Art Gallery and Axe Room (DAGAR) downtown. After only five months in Denver, Bad Axe expanded to a new location with twice as many throwing lanes. Recently the axe throwing scene in Denver has exploded with a number of new entrants. Bad Axe has described the Denver axe throwing community as “one of the strongest in the country” and is adding two more locations to prove it. Their new 12,000 sf location in Westminster aims to take axe throwing venues to the next level with 22 targets, a sports bar, and even shuffleboard lanes. https://badaxethrowing.com/bad-axe-throwing-denver-new-locations/

Here’s a complete list of places to throw axes around Denver:

Bad Axe Throwing
Neighborhood: Welby (Northeast of downtown, just south of Thornton) . Downtown location scheduled for this winter, and the Westminster location remains to be announced
Owner: International chain with locations across Canada and the United States (and now London), although the local Denver location is home to the defending World Axe Throwing Champion
Price: $41.99 per person for a two hour session with a minimum of 8 people
Liquor License: Yes. Beer and wine.

At Archery Games Denver we host what we call Archery Dodgeball; it’s all the classic rules of dodgeball, but played with bows and specially engineered foam-tipped arrows at our dedicated, indoor event center in Arvada. The Denver Post calls it “sweaty; heart-pumping, and exhilarating”, and Denver7 calls it a “Mile High Must”. We host everything from team building days, to bachelor parties, to birthday parties of all ages, to simply days out with friends and family. Or, for more group activities, check out this article with additional recommendations from Delicious Denver Food Tours.